AOMEI Partition Assistant Standard Edition is an all-in-one partition solution and disk management freeware that offers pretty much all features the average user would need to manage their disks and partitions. Based on most users’ feedbacks, the AOMEI Partition Assistant Standard Edition 6.0 fixes the previous bugs perfectly, such as fixed issues: system is unable to boot after OS migration; display Code: 12 when performing partition operations under PreOS mode; display Code: 2 – failed to assign a drive letter; the program stuck at System Updating; progress display when performing partition operations from command prompt. Besides, more new features and functions added, some of which are chargeable in many other disk partition software, for instance, enhanced GPT to MBR disk conversion: support to convert a GPT disk that has more than 4 partitions to MBR disk. Fully clone system disk between MBR and GPT partition styles and ensure system is able to boot from destination disk (e.g. clone system disk from GPT to MBR, MBR to GPT, GPT to GPT, and MBR to MBR).

With its magic features, you can resize/move, merge, split, copy, create, delete, format partition, align partition, hide partitions, convert between GPT and MBR, wipe hard drive/partition, and repartition hard drive without losing data or corruption. The built-in step by step Wizard Guides allow you to quickly and easily finish complex operations including copying partition, cloning entire hard disk, Extend Partition, Convert NTFS to FAT32, etc. All thanks to the stable partition recovery wizard, the lost and deleted partition is not your problem any more. The OS migration wizard empowers you to migrate OS to another hard disk including SSD and HDD without reinstalling OS and applications. Creating bootable CD wizard allows you to create bootable CD or USB flash drive in a few clicks only. You will not worry about the situation of OS crash any more. Moreover, with the Windows To Go Creator wizard, you can install your customized Windows 8 or 8.1 on removable USB flash drives and external hard drives to boot it from any computer on which you want to use Windows 8 or 8.1. You don’t have to buy Windows 8 Enterprise Edition to create a Windows To Go USB drive. The main interface as follows, is very clear and straightforward. 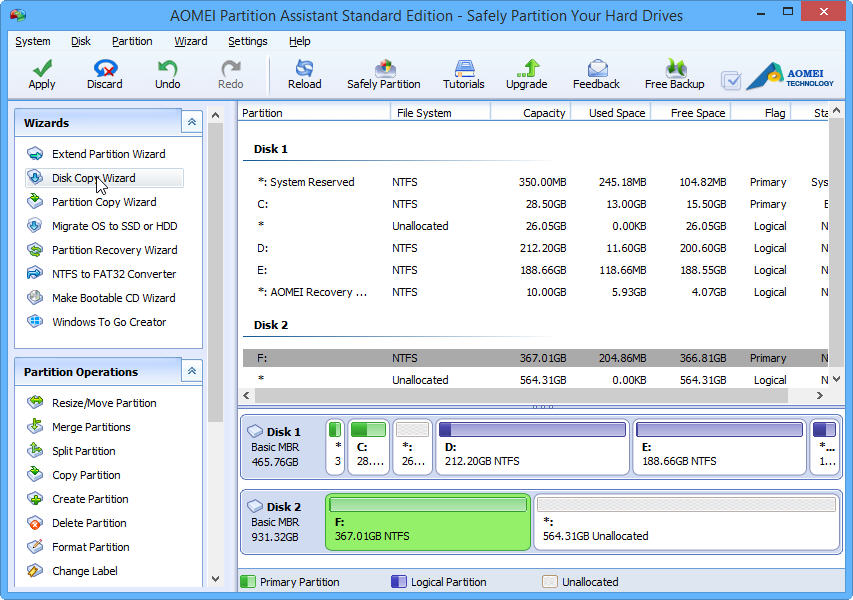 Overall, as a personal experience with this tool, AOMEI Partition Assistant Standard Edition is an excellent freeware disk partition utility with good reputation among worldwide users. This freeware is compatible with both 32 bit & 64 bit versions of Windows operating systems, including Windows 10, Windows 8/8.1, Windows 7 (SP1 supported), Vista, XP, and Windows 2000 Professional. You can partition hard drive Windows 10 or resize Windows 10 partition at your choice with just a few clicks. To be on the safe side, you’d better make a backup of your important data before modifying your disk partition jus in case if something goes wrong.