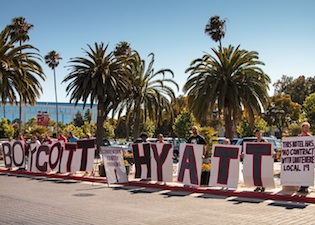 R.C Hedreen claimed that the hotel follows all the rules and regulations mentioned in Hyatt agreement and is abide by the local federal labor law. He also said that the organization is bringing false allegation against the authority as they strictly follow the organizing rights employed by the union.

Earlier in spring and summer of this year, other organizations also campaigned on behalf of the low wageworkers. Employees from different fast-food hotels and restaurants also participated in the campaign. The members of the union demanded that employees of these restaurants should be given at least 15 dollars per hour. Airport workers from SeaTac also took part in the campaign in order to demand more remuneration against 8 or 9 hours of duty.

During the rally, several campaigners from other organizations stood on the road near Hyatt hotel on Olive 8. They were shouting and asking the people there not to check in these hotels.

President of one of the activist groups-‘Unite Here’ commented that they have asked the customers not to sleep, eat or check in any of the hotels until Hedreen agree to provide all necessary facilities to the employees.

A housekeeper of Hotel Hyatt at Olive 8, who has also joined the activist group, commented that they are actually planning to organize different union for the 200 workers of that hotel. They will demand other facilities, including medical insurance, along with an increase in salary. He commented that he had to pay around 300 dollars every month to purchase medical insurances and it is hard to bear such a high-cost when earning is limited. He also added that if the hotel authority denies salary increment, then they have to provide with insurance facilities at least.

When he first started working in the hotel, the authority used to provide $10.55 for an hour. Later after 2 years, it was increased to 12.50. From then on he and other workers of the hotels have decided to protest and for unionizing.

Another employee from one of the Seattle hotels commented that the hotel authority is often hostile to the unions. They do not entertain the union leaders at all and often threat the employees that if they join the union they will be fired.

However, the other hotels in Seattle comparatively pay more than the Hedreen hotels and allow unionizing as well. The authority sometimes provide with additional facilities, especially when workers demand for it. Some of the hotels have already started providing medical insurance facilities to the workers.

Now, it is to see whether the Hyatt authority pay heed to the workers demand and allow unionizing or not.