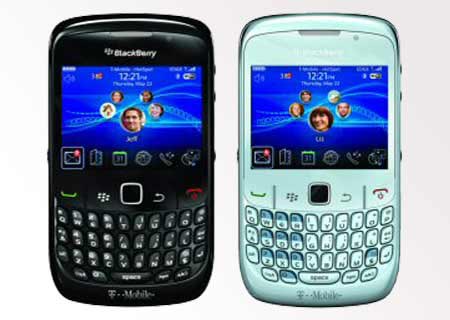 The Blackberry Curve 8520 is a simple package that delivers what it promises from a business phone of its manufacturer’s caliber. RIM made a very safe, calculated step into another consumer market and they do not disappoint. The Curve 8520 features a sleek design, attractive color-schemed cases and black rubber linings on the edges for better grip and protection. It is one of the first Blackberry phones that feature a touch-sensitive track pad which proves to be a great deal more sensitive than the pearl earlier blackberry phones featured. It reinvents the way users are able to scroll around menus and text messages with its higher sensitivity and intuitiveness. It may be pressed down like the pearl and proves to be a lot more responsive. It is the usual Blackberry menu key on the left of the track pad that opens up the main menu in the phone and the back key at the right side of the track pad that lets you exit or minimize applications and programs.
The shiny sleek finish just loves to attract smudges and fingerprints. It’s the rubber linings that make the Curve 8520 fit snuggly into your palms, giving you better grip and enhances comfort. The Curve 8520 is the lightest Blackberry phone when it was released, weighing a mere 106 grams, making it very light inside your pocket or in your hand. One of its major features is the dedicated multimedia keys located at the top of the unit; it has a pause/play button which also puts the phone on standby mode , as well as next and previous buttons. The keypad is very intuitive, with the keys on the left half of the unit sloping slightly inward to the right and sloping inward to the left on the right side of the keyboard. What this does is it makes it easier for your thumbs to reach the farther keys, making typing a breeze and a joy.
Software-wise, there is nothing missing in the Curve 8520. It has the usual software and applications needed by the businessman or student such as calendars, web browsers and the multimedia player. What is astonishing about the Curve 8520 is its battery life; it needs to be charged only one time every three days. This is surprising because most Blackberry phones have terrible battery durations, and this one really stands out of the crowd. It is, however, geared more to the casual audience than the businessman stiff. It is light, has great functionality, has beautiful keypad design and is a functional Blackberry package which costs just $129.99.